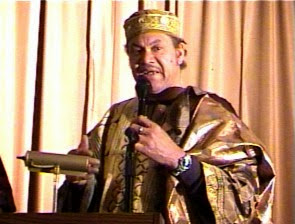 As founder and President of TransAtlantic Productions, Clemson Brown has dedicated himself to the mission that, never again, will the achievements, contributions and history of African people be "whited-out" of world history.

The journey of his mission which started over 30 years ago, has taken him all over the United States, the Caribbean, Panama, Cuba, El Salvador, Nicaragua, Europe, Mexico, and throughout the continent of Africa. He has traveled along with the leading African centered historians and activists of our time, documenting their knowledge and wisdom, as well as documenting the personalities and landmark events that have shaped and define the destiny of African people all over the world. In the process, he has created an archive of over 30,000 hours of raw and edited footage of film and videotape, making it one of the world's largest collection of African and African-American history on video.

His interest in young people led to the production of over seventy-five major documentaries, which have been used as learning materials in scores of community programs, schools and colleges across the country. Minister Brown has also trained uncounted numbers of young people in the use of media equipment and video technology. He has done this through apprenticeship programs and the establishment of media training courses in schools in the New York City area. A man of varied talents, Minister Brown has taught art, directed community activities, athletic programs and served as youth counselor, all while winning acclaim as a painter, sculpturer and creator of jewelry. His poetry has been collected and published and led to his inclusion in the "International Who's Who in Poetry" published by the International Biography Center of Cambridge, England.

His latest project is working closely with Professor Gabriel Oyibo and his milestone achivement in the solution to the Unified Field Theory, which he calls GAGUT - God's Almighty Grand Unified Theorem.

Minister Brown was educated at the City College of New York, where he majored in Fine Arts and also specialized in African-American Studies. He earned a Bachelor of Arts Degree in 1973. Clemson Brown was ordained as a minister at the House of the Lord Church in Brooklyn, New York, and presently, serves as a board member at the Temple of the Black Messiah in Philadelphia, Pennsylvania. He is married to Lady Viola Brown. They are the parents of Clemson R. Brown Jr. and Herlinda V. Brown, and the grandparents of Ashley and Latoya.