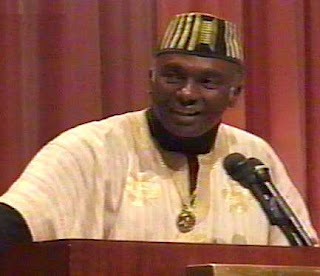 Dr. Leonard Jeffries has been told in no uncertain terms that the First Amendment for the U.S. Constitution falls far short of accommodating the truth and providing a wall against government punitive action and retaliation. His views on race clash with Eurocentric thought. This clashing of views has impacted on his chairmanship at City College of the City University of New York. These views have gone beyond academic debate. Out of his own personal integrity and his commitment to free academic expression of traditionally unpopular views, Dr. Jeffries has taken his dispute with City College to the U.S. Supreme Court to protect the free speech rights of all public employees.

He was reared in Newark, New Jersey and was graduated from Lafayette College in Pennsylvania in 1960. He received his Masters and Doctorate degrees from Columbia University. His areas of specialization include Government, Law, International Relations, African Studies and Political Science. He has traveled extensively in Africa, the Caribbean and Latin America. He was Chairman of the Department of Black Studies, City College of New York. He was also a research associate with the late Alex Haley from 1971 to 1977. He is the recipient of several fellowships. In addition, he is an author of numerous books and published articles.