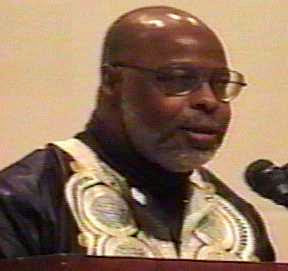 Runoko Rashidi of Los Angeles, California is an historian, research specialist, writer and public lecturer with a specialty in the African Foundation of World Civilizations.

In addition to his public lectures at more than 72 colleghes and universities, he has been associated with the Compton Community College, Marcus Garvey School, Scholar-in-Residence at Amen Ra, Instructor at the University of Hawaii at Manoa and United States Representative of Dalit Voice: The Voice of Persecuted Nationalites Denied Human Rights. His articles have appeared in more than 20 community, national and international publications including the critically acclaimed Journal of African Civilizations founded and edited by Dr. Ivan Van Sertima. The Journal articles include: " The Nile Valley presence in Asian Antiquity " Ancient and Modern Britons " Dr. Diop on Asia " Men out of Asia " The Black presence in Prehistoric America " Ramses the Great - The life and times of a Bold Black Egyptian King " A working Chronology of the Royal Khemetic Dynasties " The Moors in Antiquity " Black Land of the Pharaohs " Chancellor Williams - A tribute to a departed Scholar His article "African Presence in Early Asia" which appears in a 1985 edition of the Journal of African Civilizations is the most comprehensive work on the subject. His books include: " Introduction to the Study of African Classical Civilizations " The Global African Community - The African presence in Asia, Australia and the South Pacific