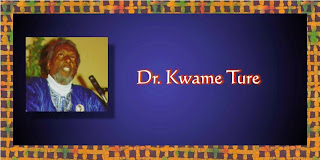 Kwame Ture was born Stokely Carmichael in Port of Spain, Trinidad in 1941. When he was 10 years old, he went with his family to live in New York.

After graduating from the Bronx School of Science, he attended Howard University in Washington DC where he received a Bachelor's Degree in Philosophy in 1964. He has been awarded an Honorary Doctorate of Laws Degree by Shaw University in Raleigh, NC.

He worked with and served as Chairman of the Student Non-Violent Coordinating Committee (SNCC) in the 1960's. During this time of the civil rights struggle, Kwame was arrested and imprisoned more than 15 times while organizaing the Missisippi Freedom Democratic Party which Fannie Low Hammer so ably represented. Beginning in 1966, he was known as the foremost exponent of the "Black Power" movement which swept the African world. He also served briefly, as Prime Minister of the Black Panther Party.

In 1968, Kwame Ture moved to Conakry, Guinea in West Africa, where he worked and studied with Osagyefo Kwame Nkrumah. After the death of Nkrumah, he continued to work and study with the staunch Pan-Africanist Sekou Toure, President of the Republic of Guinea. Kwame Ture has traveled and lectured all over the world as an organizer for the All African Peoples Revolutionary Party (AAPRP).

He has lectured at most of the major universities in the United States. He has dedicated his life to fight for Pan-Africanism and the total liberation and unification of Africa under an All-African Socialist Government. Kwame Ture is co-author with Professor Charles V. Hamilton, of Black Power - The Politics of Liberation, first published in 1967. He is also author of Stokely Speaks - From Black Power to Pan Africanism.