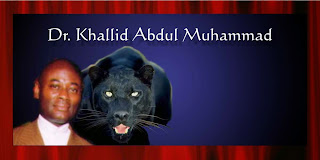 Dr. Khallid Abdul Muhammad grew up in Houston, Texas, and attended Dillard University in Louisiana where beyond his academic studies, he acquired an interest in the Nation of Islam.

In addition to being recognized as a scholar, historian, orator, debater and revolutionary, he is also a devoted father.

After Becoming a devout believer in and follower of Islam, he has served as Minister of Defense and Supreme Captain of the Fruit of Islam National Spokesman and International Ambassador of in addition to Special Assistant to the Honorable Minister Louis Farrakhan. He also served as the Minister of Mosque 7 in Harlem. Minister Khallid Muhammad is a member of the Honrable Marcus Garvey' UNIA African Communities League. He is a member of the Association for the Study of Classical African Civilizaton (ASCAC) and has lectured at many of the colleges in this country and in Nigeria, Egypt, Ghana, Senegal, Libya, South Africa, Uganda, Canada, England, France and Italy.

His effort to speak truthfully about the plight of Africans throughout the world has incurred the wrath of the federal government through the Congressional passage of House Bill HR 343, which censored him in 1994 for his speech on the Secret Relationship between Blacks and Jews at Kean College in New Jersey on November 29, 1993. Since the passage of the resolution, Dr. Muhammad spoke in 17 cities to foment interest in the Million Man March of 1995. He initiated a self defense program against the bombing of Black Churches. He organized a military presence to confront a Ku Klux Klan demonstration in support of the murderers of James Byrd in Texas.